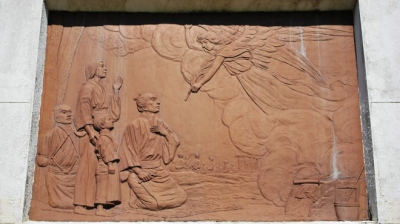 There are a lot of historic sites about Kirishitan Culture in Omura, under the influence of the first Kirishitan Daimyo Omura Sumitada.

Statues of the Young Ambassadors of he Tensho Embassy to Europe 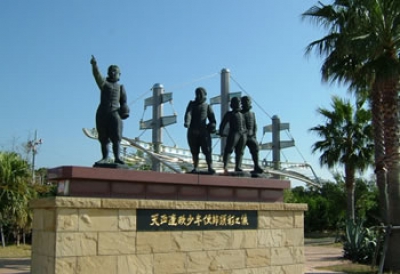 Kirishitan (Christian) daimyos, such as Omura Sumitada, Otomo Sorin and Arima Harunobu, sent 4 teenagers to Rome in order to let them learn Christian culture and introduce Japanese culture to Europe. The group brought back the advanced technology and knowledge such as the typography, and contributed the development of Japanese culture. The statues to commemorate those 4 boys were built on the 400th anniversary of their departure at the foot of Mishima Bridge leading to Nagasaki Airport. 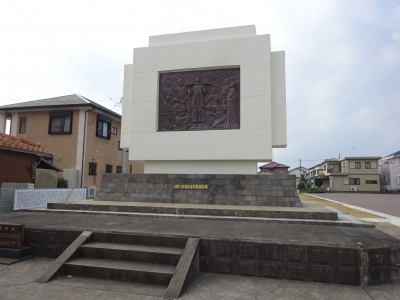 Hokobaru Martyrdom Site, located in the right side of Omura Technical High School, was the place where 131 Kirishitans were executed all at once. There is a big monument with a sheet copper relief standing there.

When the persecution of Christians (Kori Kuzure) happened, the heads of the martyrs were corned and displayed in public at this place for 20 days as a warning to others. Now a white Mary Immaculate statue is standing, praying for those who lost their lives a long time ago. 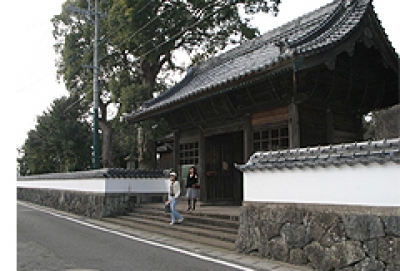 Omura domain was a fief of yielding 27000 koku rice with Hizen Omura as a castle town. During the Warring States period, Omura was a place of christianity, the chief Omura Sumitada as the Japan's first Kirishitan Daimyo at the top of the list. In the Edo period, Omura domain kept controlled by the Omura clan, from the first Omura Yoshiaki to the 12th generation Omura Sumihiro, never transferred to another until Meiji Period. The family temple of the Omuras is Honkyo-Ji Temple, where the grave of the Omura is located. Honkyo-Ji Temple was built by the first Yoshiaki in 1608 as a Nichiren Sect temple. Some of the buildings including the main building from the late Edo period still remain, and it shows the style of a daimyo family temple of early-modern times. Also at the grave of the Omura next to the main building you can see many huge tombstones despite the size of the domain itself. Those tombstones represent the religious reformation in the Edo period from Christianity to Buddhism, designated as National Historical Site by the Ministry of Education, Science and Culture on September 30, 2004. 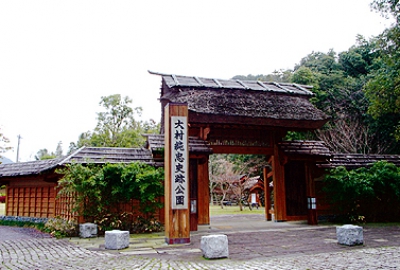 This is a history park located at the site of the last residence of Omura Sumitada. The garden with fountains and ponds still remains, and the park provides with a great deal of information about Kirishitan (Christian), Japan's trade with the West, and Omura Sumitada himself. The park is located at Daimon, Arase-machi. The residence originally belonged to Sho Yorinosuke, a chief vassal at the time, however, after Sumitada retired due to the threatning from Ryuzoji Takanobu, lived here as his retreat. Sumitada worshipped christianity here after his retirement, and in1587, his life of 55 years came to a close. 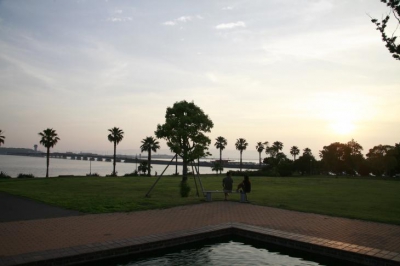 At 4.8-hectare Morizono Park, you can feel the sea breeze and enjoy the scenery of the airport and sunset. Some interesting events such as food festivals and outdoor lives are held. Also, Midori-no Fureai Kan Park Building is used for events related to gardening and green projects.